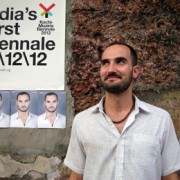 Miguelez’s work and life span across multiple continents and cultures. He is a young American-born, Mexican-educated Spanish artist who has been working in Mumbai for the past few years. His experiences have an indelible mark on his works, which explore and challenge conceptions of national identity and political geography. Miguelez shows an interdisciplinary approach, combining photography, drawing, and installation.

A simple graphic game renders the silhouette of a country a symmetric allegory of the “Rorschach Test”. The purpose of the, so called “ink blot” tests were to aid the practitioner to diagnose mental conditions based on the patient’s interpretation of a series of ambiguous images. By crafting maps of national territories into resembling these tests, the artist is questioning the state of sanity of the concept itself of nation.Armando holds MFA’s from the Stanford University in California, USA and the Sir JJ School of Art in Mumbai, India.